the Place of the Tombs of Atuan

Tenar is the main character in The Tombs of Atuan, Tehanu and The Other Wind. She is Priestess of the Nameless Ones, Arha (the Eaten One), on Atuan, one of the Kargish Isles. She serves the Nameless Ones at their temple, underneath which is a tomb and labyrinth where treasures are hidden, and where no human may set foot, other than Arha. One of these treasures is the lost half of the Ring of Erreth-Akbe. She later left her religious life behind with Ged and went to live in Gont.

Tenar is a strong person, but since she has grown up in the temple, has been raised solely to serve as a Priestess and has seen little of the outside world, she has a hard time understanding and accepting certain things that happen to her.

Tenar was taken from her family at age 5, believed to be a reincarnation of Arha, the priestess of the Nameless Ones. She was raised at the Temple in Atuan by priestesses and eunuchs, and then in a ceremony her soul was "eaten", a process that dedicated her to life-long service. There are other temples for other entities, such as the God-Kings, and dedication to the Nameless Ones has faded. Tenar finds that her authority is waning, and is challenged by Kossil, another priestess.

When she was fifteen, Tenar became high priestess. Tenar was looked after by Manan, a eunuch. Soon after, Tenar met the wizard Ged when he broke into the Undertomb. She was meant to serve the Dark Powers by trapping him there to die, but instead she fell in love with him, and together they escaped the tombs with the united Ring of Erreth Akbe. After the unification of the Ring, which gave Tenar the name "Tenar of the Ring", Ged took her to Gont to study with his old master, the mage Ogion. After a time, she married a farmer called Flint and had two children, her daughter Apple and a son, Spark. After both of them left Tenar, she adopted a burned child and named her Therru. When Ogion died, Tenar took his house. When Ged returns to Gont after leaving Roke, he moves in with Tenar. They become a couple and live with Tehanu in Ogion's house. 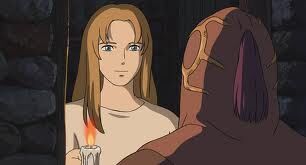 In the film, the character of Tenar is quite changed from the books. She is portrayed as a demure, kind woman in her later thirties. She is a unique character, being the only one in the film to have a natural Caucasian tan and vivid green eyes. She has blond hair and insists on leading a normal life. She also conjures potions for the locals to heal their ailments and animals alike, and this is the only occupation of hers in which she uses her magical powers. She does not seem to wield magic against others, even when threatened and kidnapped byHare, and, like Sparrowhawk, denies power as a means to attain eternal life.

She reveals to Arren that Therru was not a witch, as Sparrowhawk suspected, but that the scar on her face was caused by her parents, who burned her as a child.

Although the local women seem to spurn her, she still allows them to pay her "when they are able" as in not in a very long time. Her witchly powers are recognized by the gossiping old women, and soon this reaches Hare's ears. She is later captured by him and taken to Cob's castle.