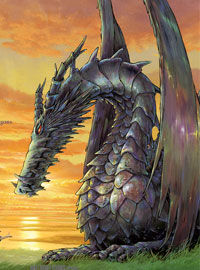 The dragon is a creature in Earthsea, neither necessarily good or evil. They occupy farthest west reaches of Earthsea and have a history of attacking villages in search for food or treasures. The main defenders against dragons are wizards. If a wizard is present during an attack, then a dragon may be warded off.

Dragons are not seen as good or evil by humans, but tend to act viciously and are very dangerous. Some believe that looking into the eye of a dragon will anger them. Ged avoids doing so on several occasions. Dragons believe that humans are idiotic, weak and short-living mayflies.

Dragons and man were once of the same species, until they went their separate ways due to their different natures and preferred tendencies. Some half-dragons/half-humans exist to this day, such as Irian, as seen in "Dragonfly".

Dragonlords are the only humans that dragons see fit to talk to. Dragons only speak the language of the Making and are worth listening to because of their very long life, in which time they have learned a great deal. If a dragonlord knows the true name of a dragon, they can control it. This occurs in the first book of Earthsea when Ged wards off a dragon by revealing its true name, and forcing it to make a promise to never return. The only known Dragonlords are Ged, Cob, King Lebannen and Tehanu. Erreth-Akbe is the legendary Dragonlord and is well known throughout Earthsea.